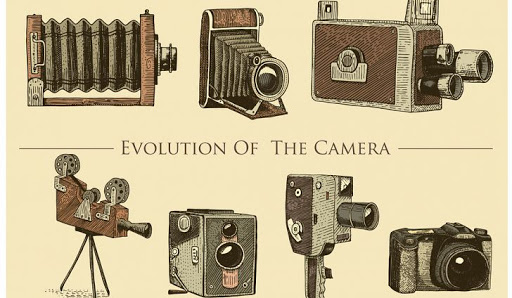 Looking Back at the Past: The History of Video Cameras

Video cameras are a widely recognized piece of technology that is intertwined into our lives in the modern world. We have it on almost every piece of technology we own. From our phones to our laptops, from our cars to our security systems. We almost take it for granted because of how common it has become. However, if we were to take a look back at history and see how the technology of motion photography has developed, we truly will develop newfound respect for it.

It is important to mention that video cameras and “movie” cameras are not necessarily the same thing. “Movie” cameras are picture cameras that utilize photographic film to record images. Film cameras have had a long history which dates back almost to the 19th century. Modern cameras, the cameras we have in almost all our devices use video technology rather than film. This kind of format is electronic and historically has been stored on magnetic tapes, CCD chips, and solid state flash memory.

Television and the birth of video

The birth of the video camera happened because of its need in broadcasting media. In the early 1900s, there were experiments done in image transmissions. At that point, a Scottish engineer named John Logie Baird made an updated version of an older device known as a “Nipkow Disk”, a disk with hole cut into it. Even though the early televisions produced mechanical video images, by the 1930s, the mechanical variations were replaced by new all electronic designs that were developed by Philo Farnsworth and Vladimir Zworykin.

Even though cathode ray tubes were suitable for broadcasting, a good medium for recording was yet to be found. The magnetic tape was an obvious choice. However, it was not really understood how to use the magnetic tape in the systems themselves. The way to implement that system was not figured out even before the mid-20th century. JVC and Panasonic developed the first self-contained large format video cassette tapes in the 1970s and they progressed the industry greatly and sparked a lot of creativity in the industry.

A lot of people claim that the Mavica started the digital camera revolution in 1981. However, that is not entirely accurate. The Mavica was not a “true” digital camera. The Sony Mavica was a single lens camera and the way this camera worked was by utilizing a rotating magnetic disc which was 2 inches in diameter and it could record up to 50 still frames per playback for printing.

The next innovations were brought by the Kodak company when they introduced a few digital camera products in 1987 and the creating the “photo CD” in 1990. They also released the first digital camera intended for professional use in 1991. In 1994, digital image capture made the leap from professional photography to consumer level, when the Apple QuickTake came out.

In 1993, the first video camera to feature video compression was released. It was called Ampex DCT. This made a wave in the industry as companies like Sony, JVC, and Panasonic started to develop the technology even further.

Digital Video in the security industry

The military were the first ones to use digital security camera systems for the first time. In 1980, the same technology that was used to bring soap operas to television was used to ensure the safety of business against theft and burglary.

The systems used CCTV- close circuit television, to allow the companies to monitor what was happening in around their business. They provided an air of security that nothing else before them provided and their efficiency was unparalleled. Although the cameras were strictly for image processing, some companies starting using videocassettes to record and view the videos at later points.

In the late 1990s, DVR devices were used. These kinds of devices used hard disk drives as storage for the recorded videos. The reason they were so crucial is because they allowed for manufactures to create devices that would be able to store huge quantities of videos and other files

Since the introduction of the 1.4 megapixel digital camera, professional video cameras have developed a lot. In the early 2000s, the first high definition digital video cameras were developed by Sony. In the modern day and age, high resolution digital video is not only used by television studios as independent films, web series, and even youtubers have started using devices like those.

Less than a decade ago, claiming that handheld devices would have the power they have now would have been unimaginable. In the realm of handheld devices, the familiar camcorder of the 1980s went through a very smooth evolution to digital. It could be argued that it was the evolution of cameras like this truly sparked fire into the YouTube and “vlogging” revolutions.

In the age of the internet, webcams are more influential than even before. Its not that they were not a thing before. But in the last few years their popularity skyrocketed. Webcams are by no means as good as regular digital video cameras; however, they are definitely a lot better than their predecessors in terms o the quality of the videos and the clarity of the images. The most predominant uses of the webcams come in the form of twitch or video game streaming.

Not only webcams, but cameras have become more common place in the current world as well. We have a camera in almost all our devices from phones to cars to computers. These cameras are not very different from the cameras that we have discussed already in terms of functionality. However, the big difference is that they capture images very differently from how they used to be captured decades ago.

Digital video cameras have progressed so much that we now have the confidence to use them in the most intricate of scientific projects as well. In astronomy for example, the technology of CCD capture remains very commonly used. Digital cameras are being used in Mars and beyond to give us a glimpse of what the universe has to offer outside our planet. The curiosity rover has 17 digital video cameras that can capture high quality photos and stereoscopic 3D videos.

Video cameras have come a long way since they were first developed. Without their history, we would not have the security cameras that are available today. If you’re in the market for a security system, then be sure to take our fun quiz to build your ideal system!

President at 2M Technology. Besides owning and running two technology driven companies, Sam has a master's degree in Computer Science. In his lesiure time which he barely gets he loves to play football and do bbq!